Lavorare per Vivere: On 7 and 8 August in Marcinelle in Belgium comes the UGL initiative “Lavorare per Vivere” to commemorate the 262 victims, of which 136 Italians, who lost their lives in the blaze on 8 August 1956. This is the chosen theme by UGL “Trade Union” that goes beyond national borders to sensitize the European authorities to the phenomenon of “white deaths”. Furthermore the “National Day of the Italian labor sacrifice in the world” was proclaimed on 8 August. 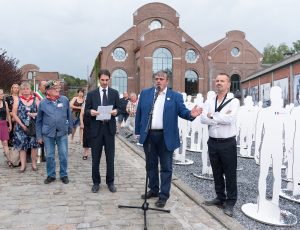 The UGL has been present in Marcinelle with 262 white silhouettes, in memory of the miners who lost their lives, due to a fire in a coal mine. Investing in prevention and safety at work is a global civic duty, which must involve the institutions, the social partners, companies and their employees “, says Paolo Capone, general secretary of UGL present at the initiative.